The real story about taxes

October 01, 2017
Since taxes are starting to become newsworthy because of Trump's tax plan, it might be a good time to take a look at some facts. According to the Tax Foundation (non-partisan) in 2016,
The top 1 percent paid a greater share of individual income taxes (39.5 percent) than the bottom 90 percent combined (29.1 percent).
The top 1 percent of taxpayers paid a 27.1 percent individual income tax rate, which is more than seven times higher than taxpayers in the bottom 50 percent (3.5 percent).
The top 10 percent of income earners paid a whopping 71 percent of all federal income taxes.
Think about that the next time you hear the mantra about the rich needing to "pay their fair share". 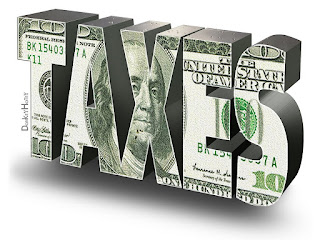 Popular posts from this blog

August 11, 2007
Imagine if every Thursday your shoes exploded if you tied them the usual way. This happens to us all the time with computers, and nobody thinks of complaining. -- Jef RaskinRecently we had a forum question on eggheadcafe.com where the user indicated they were losing Session because of the use of FRAMESET or an IFRAME.If you implement a FRAMESET where frames point to other Web sites on the networks of your partners or inside your network, but you use different top-level domain names, you may notice in Internet Explorer 6 that any cookies you try to set in those frames are lost. This is most frequently experienced as a loss of session state in an Active Server Pages (ASP) or ASP.NET Web application. You try to access a variable in the Session object that you expect to exist, and it is null. You can also see this problem in a FRAMEs context if your Web pages alternate between the use of Domain Name System (DNS) names and the use of Internet Protocol (IP) addresses. The fix is very simple…
Read more
March 02, 2019
Read more

February 16, 2007
One of the most annoying things a developer (who would normally delight in writing code, not futzing with markup) can have is getting rendering issues between different browsers. The two biggest players are of course Internet Exploder and Firefart (as I lovingly like to refer to each). In most cases that's going to take care of 98 percent of your total site traffic.

IE has had a proprietary "word-break" style attribute for a long time, and this made it into the CSS 3.0 spec. But that doesn't necessarily help you with Firefox right now. Firefox literally - (and I consider this completely idiotic, since it's been in their bug database for FIVE YEARS) does not have a reliable CSS style element to force table cell content to break in the middle of a word in order to stop the content from expanding your table / div off the page or over other content on the page. Here's a partial fix, which will work for most tables and browsers. The style declaration (I call it my…
Read more