For decades, communism was the primary religion of the left

October 07, 2021
The fall of the Soviet Union and socio-economic failures of Cuba, Venezuela, and other communist dictatorships steered the left toward a new god, mother earth or, simply, the environment. This religion morphed from global cooling in the 1970s to global warming a decade later, now to climate change or extreme weather -- normal cyclic events that have been a part of life on Planet Earth since long before humans existed.
Post a Comment
Read more

Interesting statistics about working from Home

March 30, 2021
Although surveys are underway for how Covid-19 will affect these statistics, Global Workplace Analytics estimates that 56% of the U.S. workforce holds a job that is at least partially compatible with remote work, and that 25-30% of the workforce will be working at home for more than one day a week over the next two years. According to Buffer, 90% of remote workers plan on working remotely for the rest of their careers. Old thinking believes that employees must be in the office to be productive, but this mentality disregards the distractions that an office environment comes with. Socializing, unnecessarily long meetings, and loud colleagues can slow down a productive employee. Some facts: 65% of workers said they would be more productive in a home office than in a traditional office space. — FlexJobs 75% of people say they are more productive working remotely due to fewer distractions. — Flexjobs 77% of millennials report that flexible work would make them more productive. — Regus Near
Post a Comment
Read more
March 02, 2021
Ways to Improve Visual Studio 2019 Performance Use a 64-bit OS If you upgrade your system from a 32-bit version of Windows to a 64-bit version, you expand the amount of virtual memory available to Visual Studio from 2 GB to 4 GB. This enables Visual Studio to handle significantly larger workloads, even though it is 32-bit process. Disable automatic file restore Visual Studio automatically reopens documents that were left open in the previous session. This can prolong the times it takes to load a solution by up to 30% or more, depending on the project type and the documents being opened. Designers like Windows Forms and XAML, and some JavaScript and typescript files, can be slow to open. Visual Studio notifies you in a yellow bar when automatic document restore is causing a solution to load significantly slower. You can disable automatic file reopening by following these steps: Select  Tools  >  Options  to open the  Options  dialog box. On the  Projects and Solution  >  General
Post a Comment
Read more
February 18, 2021
Thoughts on Bill Gates' book  For Bill Gates, the case for net-zero is “rock solid”. The science is settled, and he is convinced that “the only way to avoid disastrous outcomes is to get to zero”. For readers already convinced of the “climate crisis” and the imperative to go to “net zero” by 2050, his book holds no surprises. For those more skeptical of popular discussions of climate change, what is most striking is that Gates – among the world’s most celebrated and successful data scientists — is so curiously unaware or indifferent to data that challenges many of the presumptions contained in his book. Thus, for example, while Gates is aware of the low energy density and intermittency of solar and wind power (when the sun sets and the wind does not blow) and the prohibitive costs of batteries to store electricity at grid-scale, he nonetheless finds it imperative that we have policies “to force an unnaturally speedy transition”. Net-zero “requires the US to build as much wind and s
Post a Comment
Read more

August 20, 2020
A recent study of the 1918-1919 influenza pandemic by a member of the Federal Reserve board and economists at the Fed and M.I.T. compared cities that imposed stringent public health measures — including school and church closings, public gathering bans, quarantines and restricted business hours — with cities that opened faster and imposed fewer restrictions. The more stringent cities not only had fewer deaths but experienced “a relative increase in economic activity from 1919 onward.” I understand how this can be counterintuitive to many people, yet the lessons of history are there.
Post a Comment
Read more 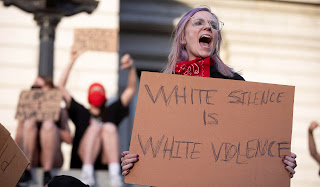 People across the country are now being called racists unless they publicly support the “protests” by Black Lives Matter, an anti-Semitic movement that calls Israel an “apartheid state,” accuses its Jewish citizens of committing “genocide,” and supports the anti-Semitic boycott, divestment and sanctions movement designed to destroy Israel. Our children are being indoctrinated with lies about what the BLM organization is and what is actually happening on America’s streets – from lies about systemic police racism to the idea that the protestors are peaceful citizens with reasonable demands. Even Nickelodeon and Sesame Street have joined the bandwagon of brainwashing our nation’s kids. "White Silence is White Violence" is the new mantra of the unhinged progressive left - minds that are closed, refuse to look at facts and history, and insist on removing any traces of it by defacing and burning symbols of capitalism and taking down Confederate statues.
Post a Comment
Read more
More posts